New Delhi: Barring Kerala, Maharashtra and Nagaland, where the positivity rate was still in the red at 9.5%, 5% and 4.7% respectively over the last two 14-day periods (December 27-January 9 & Jan 9-22), the pandemic seems to be under control in other areas with 22 states and UTs bringing it down to below 1%.

If the positivity rate, number of confirmed Covid cases per 100 tests, is above 5% measured over a 14-day period, the state is considered to be in the red zone and needs to impose lockdown in its containment zones. In Kerala, the positivity rate is still rising in contrast to the nationwide trend.

Maharashtra, which has the country’s highest 20 lakh confirmed cases so far and over 50,000 deaths due to the pandemic, has failed to bring down the positivity rate below 5%, except briefly during the December 13-26 fortnight when it was 4.78%.

Since November, Kerala’s positivity rate has been above 9%, which is a matter of concern. The state alone added more than 70,000 cases in the last 14 days, more than Maharashtra’s 38,000. Goa took the second spot after Kerala till December last week in terms of the highest positivity rate. However, it has now brought it to a manageable limit of less than 4% in the fortnight ended January 22 while Chandigarh got to 3%. There are only four states with a positivity rate above 3%. Four other states/UTs have it between 2% and 3% while 22 others have 0.2% to 1.6%, an indication that herd immunity may have set in in these areas.

Delhi, Tamil Nadu, Karnataka, Telangana, Andhra Pradesh, UP, Haryana, Odisha, Bihar have all brought it down to below 1% level in the last fortnight between January 9 and 22. Between November 8-21, there were nine states that had positivity rates between 7% and 15%. Leading the pack was Himachal Pradesh at 15%, followed by Delhi-13%, Rajasthan-11%, Haryana-10%, Kerala-10%, Goa-9%, West Bengal-8%, Maharashtra-8% and Chhattisgarh-7%. 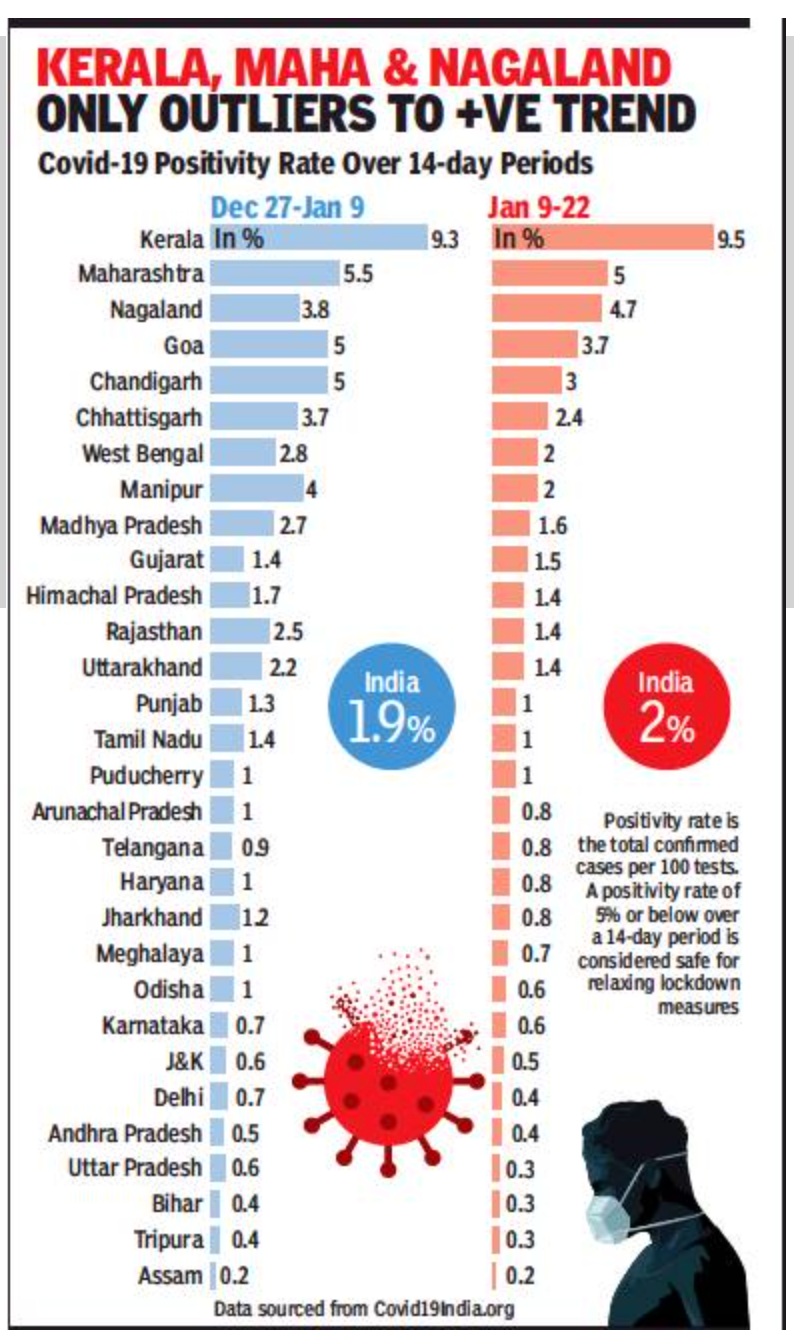