NEW DELHI: States are gearing up to start administering the second dose of Covid-19 vaccine to healthcare workers from February 13. In most places, though, it will overlap with first dosing of many beneficiaries due to slower-than-expected progress of the vaccination drive, officials said.

“It was earlier felt that the first dosing would be wrapped up completely and then the second dosing of healthcare workers would begin,” a senior health ministry official, who did not wish to be identified, told ET. “But different states have progressed differently, so there would be a clear overlap.”

The person, however, said this will not be an issue. “We do not think there would be a problem as everything is coordinated through Co-WIN app.” As per the protocols set for vaccination, the second dose has to be given 28 days after the first dose.

The vaccine becomes effective two weeks after the second dose is administered.

Even as states are increasing the number of vaccination centres to scale up inoculation of healthcare workers, the progress of inoculation drive has differed across states.

States that have moved slow face a tougher challenge as the second dosing begins. These include Jharkhand, Delhi, Tamil Nadu, Uttarakhand, Chhattisgarh and Maharashtra. 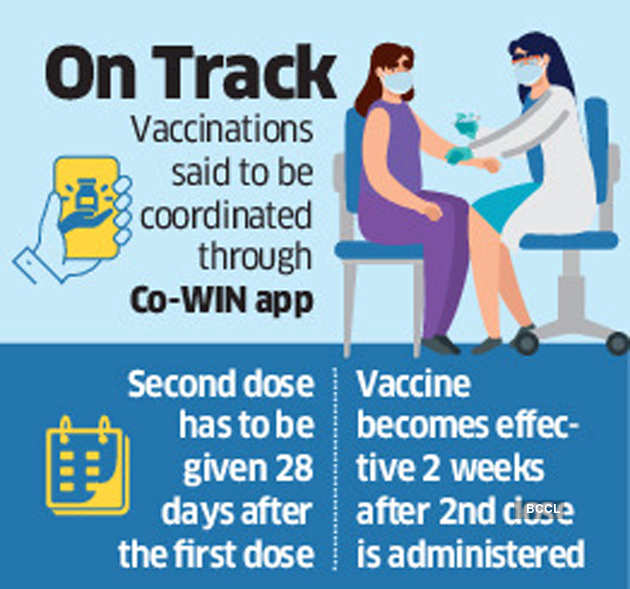 What has added to the worry of the states is the vaccine expiration date of April 29. The states would need to wrap up first part of phase 1 of inoculating healthcare workers completely by then.

Some of these states such as Jharkhand and Chhattisgarh expressed confidence that they will wrap up the vaccination drive before the expiry of the vaccine.

“We would be able to wrap up the first phase of our vaccination drive well within time,” Jharkhand health minister Banna Gupta said.

“There is initial hesitancy but we are increasing awareness amongst people.”

States like Odisha, which has planned better by calling more beneficiaries to ensure full utilisation of vaccination sessions, and Andhra Pradesh, which has dedicated staff to handle public immunisation drives, have fared better.

Chhattisgarh, one of the slow-moving states, has increased vaccination centres from 75 to 96 and is expected to further raise it to 150 to increase the number of beneficiaries covered per day.