Alibaug (Maharashtra) [India], January 24 (ANI): Bollywood actor Varun Dhawan is soon going to tie the knot with his longtime girlfriend and fashion designer Natasha Dalal.
The much-in-love couple will get hitched at The Mansion House, an exotic beach resort, in Alibaug. While the fans are yet to get a sneak peek into the wedding festivities, we got our hands on a few photos from the low-key affair.
The grand venue has several luxurious rooms and a massive swimming pool in it. ANI spotted decorators and staff members coming in with heavy packages. It’s safe to say that the wedding is going to have some big names in attendance and we can’t wait for the wedding pictures to flood our social media.
Two people carrying a quirky prompt reading ‘Awkward but Enthusiastic Dancing’ were spotted outside the venue. The decor item seems to be a glass prompt on which the text was written with purple radium ink.

Ahead of the wedding, a few of the team members were also seen carrying large outfit packages that were being transported for the groom-to-be. 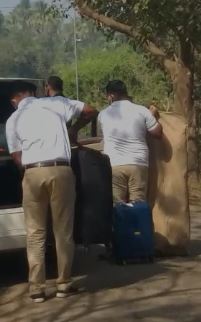 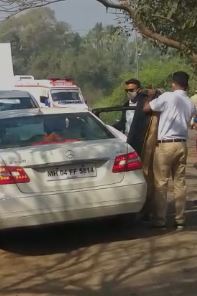 According to sources, Varun and Natasha’s wedding will be a low-key affair, in the presence of close family members and friends. All the celebrity guests attending the wedding have undergone COVID-19 tests.
Varun’s close friends from the film industry including director Shashank Khaitan, Kunal Kunal Kohli, and fashion designer Manish Malhotra are currently staying in the same five-star guest house with his and Natasha’s family.
The Sangeet ceremony had taken place on Saturday night and the Mehendi ceremony was reportedly hosted on Friday. Famous celebrity Mehendi artist Veena Nagda was present for Varun and Natasha’s Mehendi.
For the uninitiated, Veena happens to have done the bridal Mehendi of several A-listers including Sonam Kapoor Ahuja and Deepika Padukone. Varun and Natasha, who are getting married on the outskirts of Mumbai, reportedly have a strict phone policy in place for the wedding festivities.
The couple reportedly knew each other since their school days. The two fell in love when they met at a music concert years later. However, the duo has always kept their relationship low-key. Varun publicly acknowledged that he is dating Natasha when he posted a photo featuring himself with his girlfriend on her birthday in 2019. (ANI)