NEW DELHI: Tuesday saw an explosion of Covid-19 infections in the country with the daily tally close to 58,000, registering a single-day rise of 56%, the highest during a period of surge since the pandemic began.

Only once has the single-day rise in infections been higher than 56% — 63% on January 28, 2021 — and that was because the previous day’s count had fallen sharply due to disruptions in testing on Republic Day. That rise was anomalous since it came at the time when cases were falling. 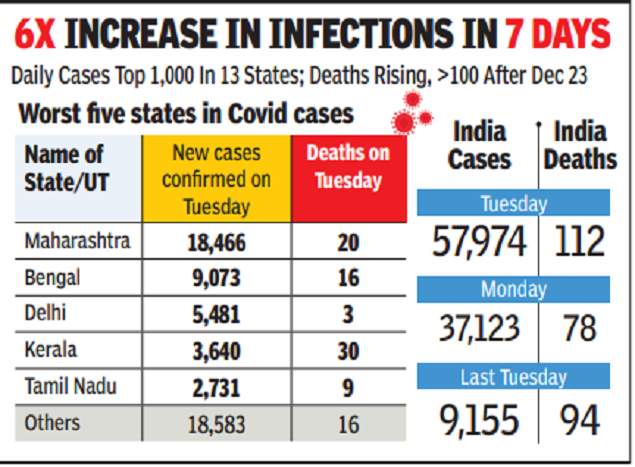 Tuesday was also the eighth consecutive day of rising cases during which the country has seen an unprecedented surge in infections, with daily numbers up nearly nine-fold since 6,242 cases were recorded on Monday, December 27.

The sharp surge on Tuesday came on the back of higher testing on the previous day following a drop on Sunday. Over 11.5 lakh samples were collected for testing on Monday, up from 8.9 lakh on the day before. Still, India’s test positivity rate touched 5% on Tuesday, which is seen as a mark of a serious surge in infections.

Daily deaths from the virus also registered a slight rise at 112, the highest in nearly three weeks and the first time since December 23 that the toll had crossed the 100 mark.

Maharashtra continued to lead the case numbers with 18,466 fresh infections, up 50% from 12,160 on the previous day. Daily detections in Mumbai crossed 10,000, with 10,606 fresh cases emerging on Tuesday, the highest for any city in India.

Delhi reported 5,481 new cases, the second highest for a city after Mumbai even as the TPR stayed well above 5% for the second day.

What’s now clearly the third wave of the pandemic in India and enveloped nearly all states and UTs of the country. Kerala, where cases were falling till the end of last week, recorded a spike on Tuesday at 3,640 fresh infections, the highest since December 15. Numbers are also rising in the northeast, with Assam posting 475 cases.