The declining Covid-19 pandemic in India slumped below another significant milestone on Sunday when weekly cases fell under the one-lakh mark for the first time in seven months.

India recorded 96,025 fresh cases in the week (January 18-24), the fewest since 93,801 infections were reported in June 14-21, as per TOI’s database collated from state government numbers.

There were 1,052 fatalities reported during the week, down from 1,259 in the previous seven days.

Overall, the coronavirus pandemic has officially claimed 1,53,454 lives in the country so far, the third highest toll in the world after the US (nearly 4.3 lakh deaths) and Brazil (2.2 lakh). 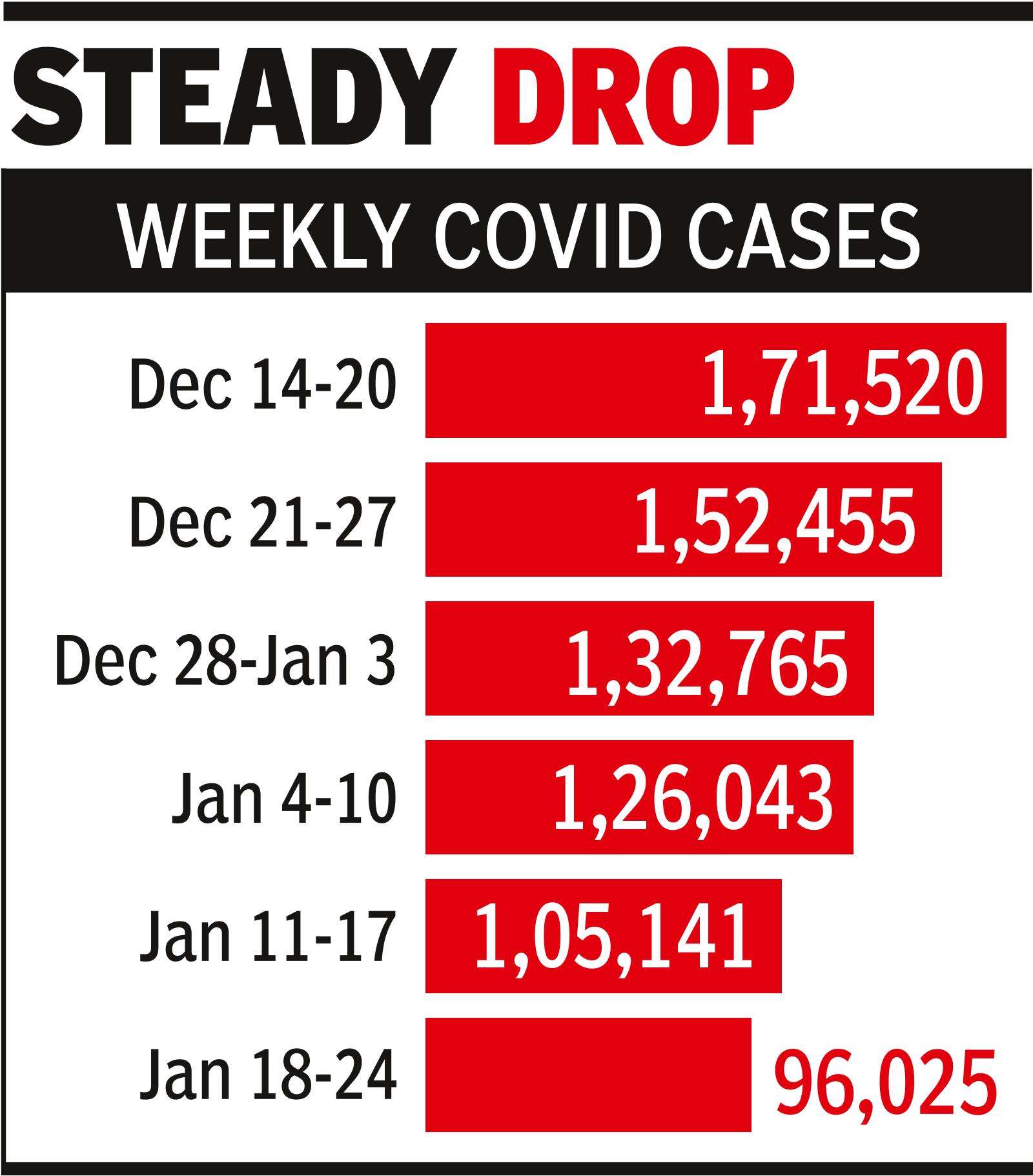 Weekly cases had touched a peak of 6,45,014 in September 6-13 before falling nearly uninterruptedly till the present week. At present, weekly cases are down to just 15% of the number recorded at the peak. This week, cases saw an 8.7% drop from the previous seven days. This was the 11th consecutive week of decline in cases. Since hitting the peak, cases have logged a rise in only one week, the one before Diwali.

Recorded deaths from the virus registered a week-onweek fall of 16.4%. The death toll has now fallen for seven weeks in a row. Covid-related fatalities have fallen to nearly one-eighth of the number recorded at the peak, when the country had reported 8,175 deaths in a single week (September 14-20).

India’s total Covid-19 caseload stood at close to 10.7 million (10,668,706), behind only the US’s tally of 25.5 million. However, while most of the worst-hit countries have seen a second, or even a third, surge in the pandemic, India’s cases have declined steadily so far since the mid-September peak. In the current week, active cases in the country have fallen by 11.3%, from close to 2.1 lakh to nearly 1.86 lakh.

On Sunday, India recorded 13,266 fresh cases, down from 14,891 reported on the previous day. Daily deaths dropped below 150 for the first time in five days, with 131 fatalities on Sunday.

Kerala continued to register by far the highest number of fresh cases at 6,036. This was the six straight day of above 6,000 new cases in the state, the only one in the country where the pandemic appears to be on the upsurge. Maharashtra again reported the highest deaths at 45, followed by Kerala (20), Delhi (nine) and Uttar Pradesh, Bengal and Chhattisgarh (eight each).